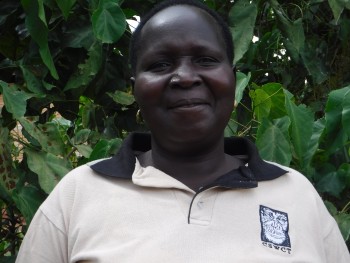 “The chimps are like people,i see myself in them.”

My children grew up with Ikuru. I know this may sound like pet trade but that’s not how it all happened.

My husband worked at the zoo, matter of fact we lived in the staff quarters at the Zoo but I had never had an encounter with any of the animals. As for me I was working as a house keeper at Debra Cox’s house, the first CEO of Chimpanzee Trust then Chimpanzee Sanctuary.

Debra had some animals at home but those were specifically dogs and nothing wild. My job was to clean and then feed the dogs. She loved my work and always commended me on how neat and clean I was.

But one day as she was praising me for the good job I do around the house, something was off, it was a bit unusual until she revealed to me that she needed my help to take care of a baby chimp.

Four year old Ikuru, now I had never seen a chimpanzee before, besides meeting them in folk stories that we were told as children that Chimpanzees had four fingers and if they found you with a fifth finger, it was their duty to break it off I hadn’t seen them at all.

But Debra didn’t know all that as she opened the cage and let little Ikuru come out, she looked lost, sunken and like a little lost baby. She grabbed onto everything especially Debra’s hand. I looked at her once and I fled the room.

Debra then called me back and I told her I couldn’t, the chimp is going to break off my fifth finger, I scoffed. She looked at me and smiled and said that is a myth. I still have my fifth finger on, she said.

She then told me about how gentle and friendly chimps are and as I became more accepting of my new role I realized Ikuru was like any normal four year old child, she needed my attention all the time.

She called me out every time she was hungry. She liked playing and soon she was playing with my children, she followed me everywhere I went but the most surprising part for me was seeing her suck on her thumb, it was the most human thing ever.

I fell in love with her and even started letting him come home with us. Some days he would sleep at Debra Cox’s and if I took long to show up for work Ikuru would come to my house and knock at the door until I opened for her.

It’s been 17 years now since we met and people always ask me why I have never left for all those years.  For me the answer is simple, I can’t leave my baby behind. I stayed because I wanted to see Ikuru grow up.

I stayed because I wanted to see for myself that she would be fine because she is a large part of my children’s childhood at least we can all know she’s fine by me staying with the organization that’s responsible for her welfare.