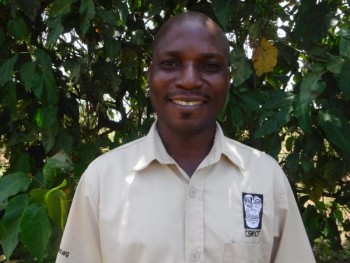 “Wild chimps have problems. There is not enough food and some are suffering. They are not safe. They can be killed when they go into someone’s garden looking for food.”

Moses is originally from Bugiri district, northern Uganda. Before coming to work on Ngamba, he worked at UWEC for five years, filling a number of different posts.

Moses started working on Ngamba in May 2002 and really enjoys being in the vicinity of the chimps. He loves the chimps and thinks of them as his own children. His favorite chimps are the ones that he knew formally at UWEC before they were moved to Ngamba. He has a particular affection for Eddie, whom he has grasped, grow from a stubborn youngster into a high ranking adult male.