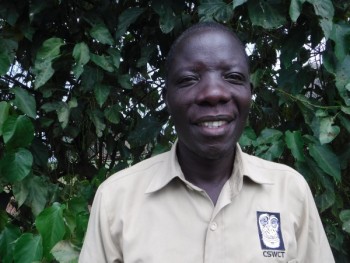 A Japadhola who hails from the Northern part of Uganda. He loves debates/Public discussions and has always loved nature and wildlife thus his position of caregiver which calls for taking care of these endangered species

Amos joined the organization in 2004 at that time he was among the people that rescued Afrika a chimp from Queen Elizabeth National Park that is now at the island. He is also responsible for the new chimpanzees that arrive at the island and those that go through the integration process.

He is a caregiver at the island as well as the island kiosk manager. He loves the work ethic all individuals within the organization bring to the table. His favorite chimpanzees are Afrika and Oketch for he has watched both chimps grow ever since their setting up at Ngamba and Afrika becoming a mother.