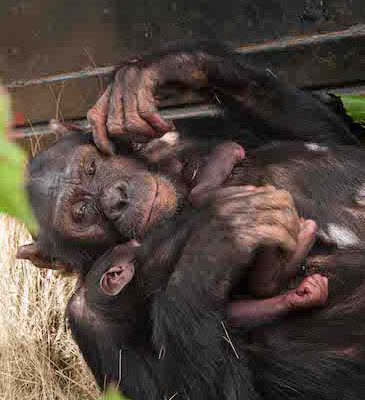 Ngamba Island’s chimpanzee community is celebrating the birth of a baby to Afrika. The baby boy was born on 27th March following an implant failure that had Afrika conceive in July 2014.

Dr. Titus, the Sanctuary Manager and Veterinarian gives us an account of the events: “The previous night we had had a scuffle and screaming in the holding facility. When we went to check, there seemed nothing unusual. That day I woke up earlier that usual to be sure that all was well. As we surveyed the community, Paul- a Caregiver noticed Nagoti (female chimpanzee) with a baby chimp. Afrika and Connie were closely trailing her to have their turn at nursing. We immediately separated the mothers and let the other chimpanzees out into the forest. Soon Nagoti lost interest and handed him to Connie.

Meanwhile Afrika was pleading and bobbing for whoever had the baby to let her cuddle him. This opportunity presented itself earlier than she thought. Connie’s attention moved to joining the group in the forest. We then separated Afrika from the rest of the chimpanzees and let her enjoy untempered moments with her little one. Later we tricked her into letting him go for a moment so I could examine him. I realised he had got injuries during the earlier scuffle and he also had a broken arm. I cleaned and stitched his wounds and put his arm in a cast. He is now well on his way to recovery.

Dr. Joshua, Chimpanzee Trust’s, Conservation Programs Director and Veterinarian says that the female chimpanzees at Ngamba Island are put on contraception to prevent them from conceiving as the space and resources at the sanctuary is not enough to accommodate a large number. These implants last 3 years and have so far a failure rate of about 5%. Ngamba island is one of the sanctuaries where implants have been consistently used for birth control with success. This is attributed to the consistent annual health checks done on all the individual chimpanzees. “She tested negative for pregnancy in April, her implant was physically palpated and determined to be in place. Her progesterone levels indicated a working implant, though I must say not much data is available on the efficiency of the implants,” Dr. Joshua commented.

Chimpanzee Trust works with government agencies like National Forestry Authority and Uganda Wildlife Authority, communities and private land owners to protect and conserve chimpanzee habitats in the wild so they dont loose their homes to human activities. 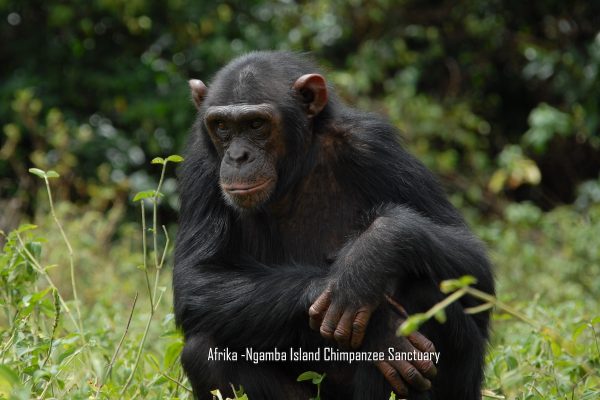