A group of hunters in Kitoba Sub County killed a chimpanzee in Mid-March. The hunters cut the animal into pieces, roasted and allegedly fed it to their dogs. Chimpanzee Trust team reached the scene and found remains of the chimpanzee. ‘We informed the Uganda Wildlife Authority who are now making investigations on the whereabouts of the hunters,’ says Nebat Atuhura, Conservation Officer. ‘They have not been seen since the time of the incidence.’

This was the first such an event has been reported in this district since we started the field conservation program in 2007. The Chimpanzee Trust is working through its Community Based Monitoring strategy to raise awareness about dangers of bush meat and killing chimpanzees, in addition to coordinating with the Uganda Wildlife Authority to curb such happenings.

In another event an adult female chimpanzee was knocked down along Hoima-Masindi road in western Uganda. This happened as she crossed the road with her baby. This hit and run incident was also the first to be documented as chimpanzees that cross this road from Mparangasi forest to Kyamaleera forest are known for being very cautious and alert. Road construction and extension through forests have increased access of people to forests and forest resources, exposing wildlife to humans. 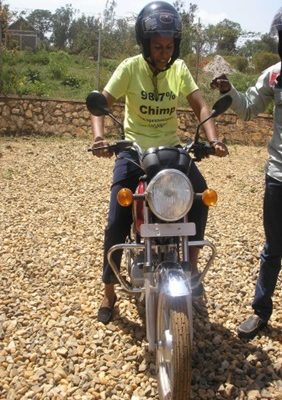