Posted on April 21, 2016 Categories: News No comments yet 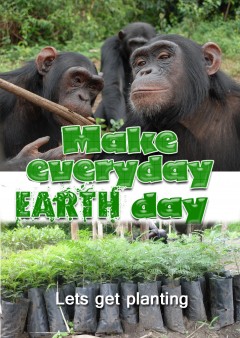 On April 22, 1970; the first Earth day was inspired and celebrated by then American Senator Gaylord Nelson of Wisconsin after seeing the damage caused by the massive oil spill in Santa Barbara, USA. Forty-six years later, worldwide, we celebrate this day, to honor our mother planet; the Earth, one of the eight planets that constitute our solar system, and the only habitable one.

Our mother planet is home to an estimate that could be anywhere from 5million to 100 million species, however only 2 million have been identified. These species range from mammals to reptiles to protozoa and fungi.The Earth in addition to having species also has natural habitat for these species, ranging from forests, to wetlands to moist soil and lakes. Specifically looking at the forest cover, our planet, Earth is currently losing over 15 billion trees each year due to deforestation, land development and poor forest management practices. The Chimpanzee Trust has been working with farmers in Northern Albertine Rift landscape of western Uganda to conserve the last remaining privately owned forests that are home to the endangered eastern chimpanzee species that reside therein. Forests on private land in Uganda are being lost due to increasing human population, unsustainable harvesting practices, and unsustainable farming practices, which unless curbed, will lead to the total loss of privately owned forests in the landscape by 2030. With tropical forests constituting many trees, and home to wildlife as we celebrate Earth 2016 theme Trees for Earth, the Chimpanzee Trust is raising awareness and requesting the most intelligent species (humans) that roams this mother planet to conserve, afforest and reforest, the quickly disappearing chimpanzee habitat; the tropical forests.

The Trust envisions that with the conservation of its habitat, the chimpanzees will also be conserved.